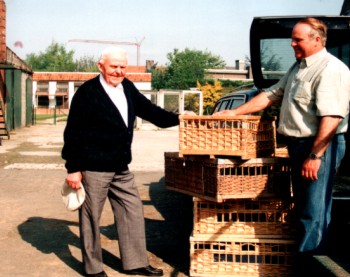 Vanhee`s Loft Worldfamous topbreeder "Motta" B63-3100031The world famous Vanhee strain was founded by Gerard Vanhee (1910 - 1998) and continued by his son Michel. When Michel died in a tragic car accident in September 1998, the pigeons were auctioned off in four auctions. However, in the four months between Michel's accident and the auctions, his daughter (Gerard's granddaughter) Annemie decided to continue the Vanhee legend. She kept and bought back the best birds out of the main Vanhee lines and is now continuing the Vanhee racing success again.

Gerard Vanhee started racing pigeons in 1925, aged 15. From the start he used a scientific approach to pigeon racing: he read every piece of information on pigeons he could get his hands on: not only the different racing systems and methods of the champions of that day, but also on how to feed and take care of the pigeons, how to prevent or cure diseases, etc. This attitude gave him a distinct competitive advantage against other fanciers. However, the second world war saw the destruction of his entire loft. After the war Gerard first watched the results lists to see who were the best fanciers before and after the war and travelled through Belgium to buy eggs and youngsters of these people. All these different strains he molded into his own bloodline. The basic of the Vanhee loft is therefore a multitude of strains, such as Stichelbaut (through Frans Cloot of Lauwe), Descamps-Van Hasten, Emiel Dupondt, Gentiel Depoorter, Albert Gorin, Gilbert Vandenweghe, Cattrysse, Huyskens-Van Riel, etc. This costed a lot of time, effort and money, but it paid off.

Winning first Nationals would become a Vanhee trademark: between 1949 and 1995 the Vanhee loft scored no less than 20 (twenty) National Victories. This is an absolute record that will not be broken very easily. Among those 20 National victories there are also two 1st Internationals.

With such records one tends to focus on 1st Nationals only, but let's not forget that Vanhee also won 16 2nd Nationals on top! This is another record.

Another one of the great achievements in pigeon sport is going to the Olympiads. To achieve this one has to present outstanding overall results in the two years preceding an Olympiad. "Just" winning a first National is not enough. The Vanhee loft achieved Olympic honour no less than 5 times: 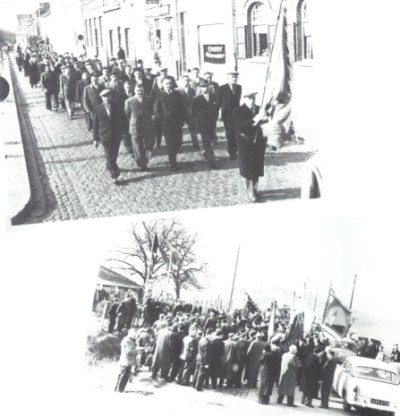 It is almost impossible to sum up all the achievements of the Vanhee lofts, even if we concentrate on the top performances only. The most important recent results (between 1993 and 1998) are:

If we take a look at the National Winners between 1989 and 1998 on other lofts we find no less than 20 with Vanhee blood in their pedigrees as well. This is a proof that the Vanhee bloodline did not only well in the hands of Gerard and Michel Vanhee themselves but also on other lofts. Among the most famous ones we mention: J.L. Van Roy of Ronse, whose "Playboy Barcelona" (1st International Barcelona 1991) was a Vanhee x Van den Wegen cross. In view of this success the Vanhee loft in turn was strengthened with Van den Wegen blood out of the lines of "Oud Doffertje", "Stefan", "Barcelona", "Parel" and "Indurain". Ivan Delrue, Bovekerke, National Long Distance Champion K.B.D.B 1991 Marc & Gerard Santens, Oudenaarde, Narbonne specialists and 1st National Narbonne winners in 1986, 1988 and 1990. Braakhuis, Holland: his "Gouden Koppel" came out of the line of "Patrick" of Vanhee. The same day Vanhee won 1st National Lourdes with a descendant of the "Patrick" line, Braakhuis did the same with 1st National Dax. These are only a few examples. People all over the world have bred champions out of Vanhee pigeons, making the Vanhee name famous world wide.

Over the years the Vanhee strain was developed into five lines. Of course, on the Vanhee breeding lofts, the five lines were woven into each other; they were not kept completely pure all the time. Nevertheless all successful pigeons of the Vanhee strain find their origins in one or more of these lines.